We have selected someplace for our UK Top Attractions Private Tour package. Please get in touch with us if you want to arrange any. There are two options. If you’re going to book with world-leading companies, you can also book with them via the below link. In this way, you have both options. Booking with a local small company or booking with a big, leading brand. 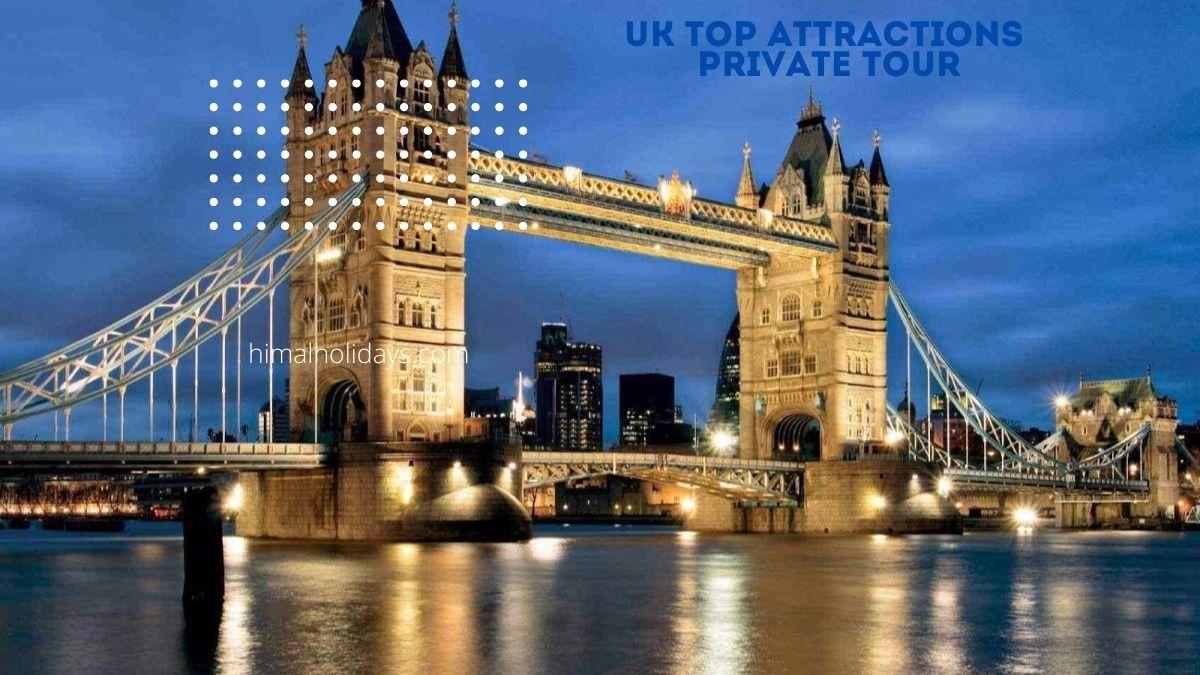 England is one of the most visited countries in the world. It offers almost endless possibilities for things to see and do. This small but influential country is part of the beautiful British Isles with fascinating history, exciting cities, and rich cultural traditions. Historic sites are everywhere, from prehistoric megaliths and ancient Roman sites to centuries-old castles and town centres dating back to the Middle Ages. England is also extremely easy to get around, with its most popular tourist destinations well connected by trains and buses. Or you can drive between points of interest on a well-planned system of motorways. So whether you choose to tour the country by car or public transport, you’re guaranteed an unforgettable experience.

Stonehenge, 10 miles north of Salisbury on Salisbury Plain, is Europe’s best-known prehistoric monument (the site is so popular that visitors need to purchase a timed ticket in advance to guarantee entry). Exhibitions at the excellent visitor centre set the stage for a visit, explaining through audio-visual experiences and more than 250 ancient objects how the megaliths were erected and telling about life when they were placed here, between 3000 and 1500 BC. After walking around the enormous stones, visit the authentic replicas of Neolithic Houses to see the tools and implements of everyday Neolithic life as volunteers demonstrate skills from 4,500 years ago. Although you can’t go inside the circle to wander among the stones during regular opening hours, you can reserve particular early morning or late evening access to the process through English Heritage, which manages the site. Location: Shrewton, Wiltshire  Official site: http://www.english-heritage.org.uk

2. The Roman Baths and Georgian City of Bath

If you only have time to visit one smaller city in England, you couldn’t do much better than Bath. This wonderful city boasts more fantastic tourist attractions than you could hope to see in a day. While most famous for the magnificent 2,000-year-old Roman Baths built around the city’s rejuvenating hot springs, it’s equally well known for its honey-coloured Georgian Townhouses such as those on Royal Crescent. Some 500 of the city’s buildings are considered historical or architectural importance, resulting in the entire town being granted World Heritage status. Bath makes an ideal location to explore some of England’s most stunning countryside, including the Avon Valley, the Mendip Hills, and countless other fantastic Somerset landmarks. Location: Abbey Chambers, Abbey Churchyard, Bath

The magnificent York Minster is second in importance in the Church of England only to the cathedral at Canterbury. It stands in the centre of York, surrounded by half-timbered homes and shops, medieval guildhalls, and churches. In turn, York’s romantic streets are surrounded by three miles of magnificent town walls that you can walk atop for views of the city and its surroundings. While there, visit the National Railway Museum, one of England’s most visited tourist attractions. York is a good base for exploring the countryside, particularly the rugged beauty of the Yorkshire Dales and the North York Moors. You’ll find some of England’s most beautiful historic towns and cities in Yorkshire, including Durham and Beverley. Accommodation: Where to Stay in York

Located in Upton, just over a mile north of Chester city centre, Chester Zoo is England’s most visited attraction outside of London and a particular favourite for families. The more than 11,000 animals in this 125-acre site represent about 400 species. But the zoo’s appeal reaches more than animal lovers, with prizewinning landscaped gardens. You can tour these extensive grounds on the zoo’s monorail system to get a highlight, including Chimpanzee Island, a penguin pool, and Europe’s largest tropical house. While in Chester, take time to walk its walls, the best preserved of their kind in Britain, and see Chester’s other most distinctive feature: its galleried walkways run the length of the stone and half-timbered buildings dating from the 14th century. Address: Cedar House, Caughall Road, Chester. Official site: www.chesterzoo.org

Covering some 900 square miles, the Lake District National Park is a must-visit destination for travellers to England. With 12 of the country’s largest lakes and more than 2,000 miles of rights of way waiting to be explored, there’s little wonder the region continues to inspire, with its magnificent views and scenery straight out of a painting. Other things to do are visit the park’s many falls, including Scafell Pike (3,210 feet), the highest mountain in England; lovely little towns and villages such as Grasmere, and boat excursions across Lake Windermere and Ullswater. Address: Murley Moss, Oxenholme Road, Kendal

Located in the heart of the historical city that bears its name, Canterbury Cathedral (a UNESCO World Heritage Site) is home to the Archbishop of Canterbury and is the cradle of English Christianity. It all started when St. Augustineconverted the pagan Anglo Saxons here in 597 when he became the first bishop. But there’s much more to this beautiful medieval city than its cathedral. Canterbury is also a popular cultural and entertainment destination with great shopping, galleries, cafés, and attractions such as those focused on Chaucer’s medieval England and the city’s Roman past. Address: 11 The Precincts, Canterbury

The incredible Eden Project is a collection of unique artificial biomes containing a fantastic collection of plants worldwide. Located in a reclaimed quarry in Cornwall, the complex consists of huge domes that look instead like massive igloo-shaped greenhouses. Each houses thousands of different plant species in tropical and Mediterranean environments. As well as these stunning displays of plant life, the Eden Project hosts numerous fantastic arts and music events. Location: Bodelva, Cornwall, Official site: www.edenproject.com

Downstream from Tower Bridge, Greenwich is the London base of the Royal Navy and holds England’s largest expanses of preserved historic architecture and parks. And although lovers of things maritime will undoubtedly gravitate to Greenwich, there’s a lot more there than ships and boats. The highlight for most visitors is the Cutty Sark, the last surviving 19th-century clippers from the lucrative tea trade between Britain and China. Built in 1869, the Cutty Sark was one of the finest and fastest ships of its day, and you can board it to explore the clipper, from its figurehead to the sailors’ quarters below decks.

The Discover Greenwich Visitor Centre exhibits show more than 500 years of maritime history. In Queen’s House, the National Maritime Museum is the largest of its kind globally, featuring the Royal Navy from Tudor times to the Napoleonic Wars. Greenwich Park, dating from the 15th century and the oldest of London’s eight Royal Parks, is filled with beautiful gardens and walking paths. You’ll find the Old Royal Observatory and the Prime Meridian Line, marked by a steel rod on the floor of the Meridian Building. The zero meridians of longitude divide the world into eastern and western halves; you can stand with one foot in each hemisphere. Address: King William Walk, Greenwich, London, Official site: www.rmg.co.uk